Above and below Chepstow Castle © Crown copyright (2013) Visit Wales 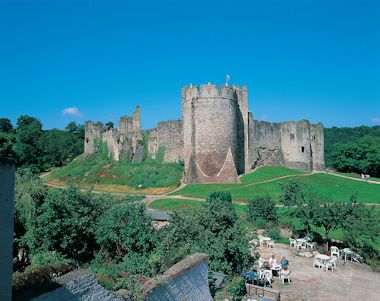 Chepstow, on its rock above the swirling waters of the River Wye, stands guard over a strategic crossing point into Wales. In a land of castles, Chepstow can rightly claim special status. Started by the Normans just after the Battle of Hastings in 1066, it was amongst the first of Britain's stone-built castles.

Mellow-walled Chepstow is an intriguing amalgam of different periods. At its core remains the original stone keep. In later centuries, towers, walls, gatehouses and barbicans were added, until the long, narrow castle occupied the entire cliff-backed ridge above the Wye. A final complement to its strength and siting was paid when Chepstow was adapted for cannon and musketry after a long siege in the Civil War, and it continued in use until 1690.

This well-preserved landmark castle, one of the few in Britain to trace the evolution of medieval military architecture from start to finish, merits a lengthy visit.