Welcome to historic Chepstow in the Lower Wye Valley. This mediaeval town boasts an impressive castle dating from the 11th century which stands on a spectacular spot high on the cliffs above the River Wye and it is considered by some to be the oldest surviving stone castle in Britain. There is also the town gate, the port wall (both late 13th century), the Priory Church of St Mary and the town museum to attract historians and culture buffs.

Chepstow has much more to offer visitors, however. Music lovers may catch a concert by the Chepstow Male Voice Choir or maybe the Two Rivers Folk Festival, which is a three-day festival of folk music and dance. Alternatively, you may wish to attend the biennial Chepstow Festival of open-air theatre at the castle (under a a 350m² 8m high canopy). 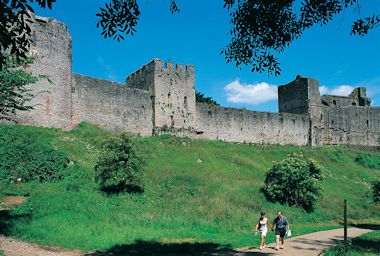 The town offers a range of coffee shops, pubs and restaurants as well as a good range of accommodation. There is a Friday market and a wide variety of shops selling clothes, gifts, healthcare items and flowers as well as a supermarket.

Chepstow Racecourse provides a racing programme throughout the year and important fixtures in the racing calendar include the Coral Eurobet Welsh National, the Tote John Hughes Rehearsal Chase, the Welsh Champion Hurdle and the Golden Daffodil Stakes. Alternatively, try one of the magnificent walks in the Wye Valley or attend a course with the Chepstow and District Yacht Club.

Nearby attractions include Veddw House (two acres of ornamental gardens and two acres of woodland), the Hidden Gardens & Grottoes of Dewstow (approximately 7 acres of gardens and landscapes, Wyndcliffe Court (built in 1922 and a superb example of an Arts and Crafts Garden), Tintern Abbey (12th century Cistercian abbey) and Caldicott Castle (14th century). Harry Potter fans will be delighted to know that J.K. Rowling lived in the nearby village of Tutshill from the age of 9.